Frances “Poppy” Northcutt discusses the tradition of transgender inclusion in Southern Feminism and comments on the issues facing both the trans and feminist communities. Northcutt comments on her involvement with feminism in the South, particularly in Houston, Texas and the ways in which trans people can support abortion clinic defense.

Cristan Williams: How long have you been involved in the feminist cause? Can you tell me about the first action you participated in?

Poppy Northcutt: I’ve been involved in the feminist movement since 1970.  The first action I took part in was on August 26, 1970.  That was the Women’s Strike for Equality, the first nation-wide action that NOW had.  I had been reading about the women’s rights movement in the newspaper and magazines but didn’t know whether there was a Houston group or how to find them.  Anyway, sometime in August I read a story in the newspaper about the strike and found out that the Houston Area Chapter of NOW would be demonstrating outside the federal building downtown.  So at last I knew how to find them.  I took the day off from work and went to the strike.  There were only about 15 women there but I happily joined them that day, found out when and where the next  meeting was, attended that meeting, agreed to be the chapter’s PR coordinator at that meeting, and was off and running.

CW: When did you first became aware of trans people who were involved in the feminist cause?

PN: Not sure exactly but it was in the early 1970’s.  Phyllis Frye was in law school at the same time as a friend of mine and when we had the National Women’s Conference here, Phyllis was a volunteer.

CW: Feminism in Houston has been trans inclusive for some time. Back in the 1970s, most of the feminist organizations were trans-inclusive. From instance, the Houston League of Women’s Voters and even the National Women’s Conference was trans-inclusive. However, during that same era, it seemed that some East and West coast feminist leaders were staunchly anti-trans. Why do you think was?

PN: I’d like to think it was because we were smarter and had more common sense but practical realities probably had a lot to do with it too.  Those folks in New York and California were living in liberal enclaves. But living here, we were surrounded by good ole boys all the time.  The Ku Klux Klan wasn’t something we read about; we often came face-to-face with those guys.  We didn’t have to go looking for enemies to our cause; they were everywhere around us.  So when someone wanted to join us in the fight, like Phyllis did, we were thrilled.  We quickly learned that what was important was what was in someone’s head, not what was between their navel and their knees.

CW: What are your thoughts about the [Trans Exclusionary Radical Feminist] movement?

PN: I am amazed that a TERF movement even exists because it is so contrary to what I consider to be the fundamental values of feminism.

CW: I’ve noticed that the same hubris people who stand in the way of trans people are generally the same people who are standing in the way of the right to safe and legal abortion services for many of the same reasons.
​​
The Pacific Justice Institute, the very organization that hounded a trans kid to the brink of suicide, is also an anti-abortion group. The Salt & Light Council, the very organization that went on the news to falsely claim that trans children were scurrying up and and over bathroom stalls so they could watch cis people use the restroom, is also an anti-abortion group. I​n fact, the right-wing terrorist group that was recently captured in the Houston area by the FBI, waxed on about their support of “biblical gender roles” in their “manifesto.”

Why do you think most of folks who are anti-trans are also anti-abortion?

PN: I think we share the same opponents because both the trans cause and the feminist cause challenge sex roles and sex role stereotyping is central to most fundamentalist religions. We challenge what our opponents  view as “natural” and “necessary” and “God-ordained”. I think they are very afraid of us because we cast doubt on things they view as certainties. And if one certainty bites the dust, then what else might fall? 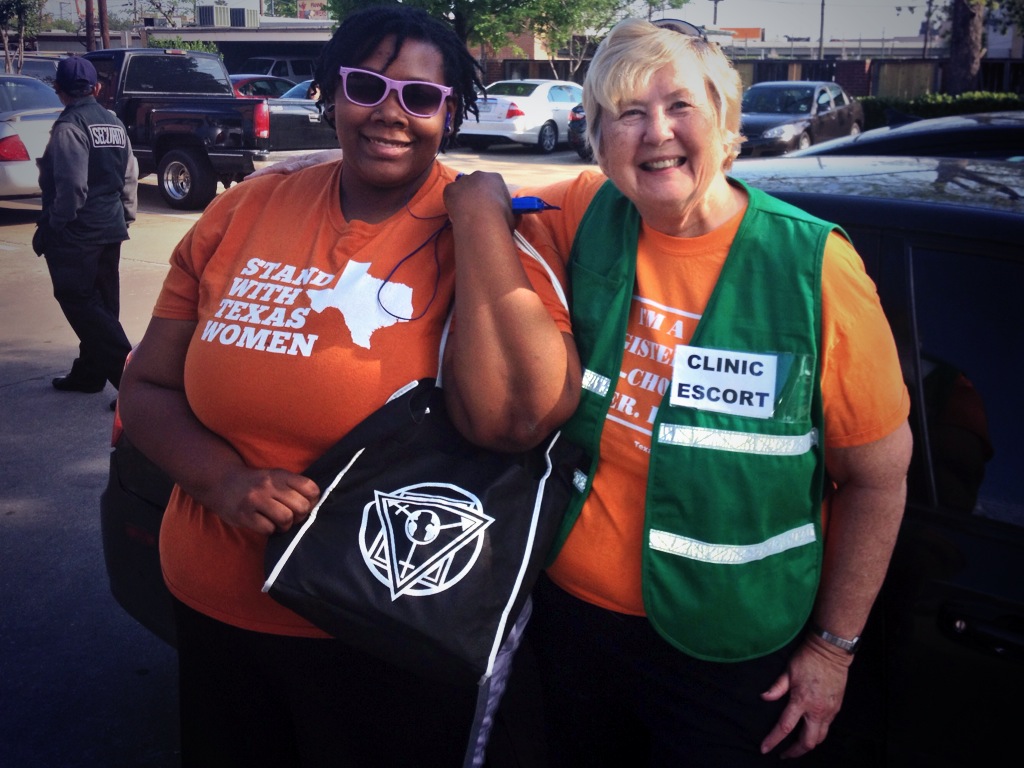 Why do you think the forces of anti-equality fall back on this argument?

PN: Bathrooms, bathrooms, bathrooms!  When we talk about justice, they always want  to talk about bathrooms!  It’s just a fear tactic, trying to make people afraid that someone is gonna be lurking and looking and lusting after them in the bathroom. I still have copies of the flyers that the right-wing used to hand out in opposition to the Equal Rights Amendment.  They are full of appeals to fear.  Fear always is the number one argument of the right wing.  Today, the NRA is out spreading fear that Obama is gonna take away their guns.  And somehow, feminists and gays and transfolk are gonna destroy their marriages.  Your question is why do they fall back on the bathroom argument. The answer is that with their audience, fear works.  That’s why they keep using it.

CW: NOW is a trans-inclusive organization and specifically supported adding trans people to national hate crime legislation. If a trans person wanted to get involved in their local NOW chapter, how would they go about it?

PN: NOW welcomes anyone who supports our goals so if someone is interested, go to a meeting.  Our meetings, with rare exception, are required to be open to the public.  So go to a meeting and join.  The dues are reasonable.  Normally they are $40 per year but there is a sliding scale available from $15 up for those who need it.  The annual dues include national, state, and local membership.  In Houston we usually meet on the first Tuesday at 7 pm at the Montrose Center.  People can also check with www.now.org for contact info on chapters in their area.

CW: Do you, as a long-term feminist opinion leader, have anything else that you’d like to say to the trans community?

PN: I welcome the involvement of the trans community in the feminist movement.  We don’t just  have the same opponents;  we share the same goals of respecting individuality and self-determination and seeking full equality and justice for all.

The National Organization for Women (NOW) is the largest multi-issue women’s rights organization in the United States dedicated to taking action to bring women into full equality. Frances “Poppy” Northcutt is the President of the Houston Area Chapter of NOW and of  Texas State NOW.

Poppy is a semi-retired attorney who began her professional life working in the space program  as a return-to-earth specialist. She was the first woman to work in NASA’s Mission Control Center in an operational role during the Apollo 8 spaceflight. She became an activist in the women’s rights movement in the early 1970’s and served on the National Board of Directors of the National Organization for Women in 1971 and was the founding chair of the Harris County Women’s Political Caucus in 1972.

In short, Poppy is real feminist warrior who has spent the last 44 years of he life on the front lines of the feminist movement. Poppy is – and has always been –  a trans inclusive feminist.